You are here: Home » Tyn Church of Our Lady in Prague

Tyn Church of Our Lady in Prague

Our Lady in front of Tyn on the Old Town Square is the most important church building, whose strong towers rise above the Old Town Square and the entire right bank of Prague. It stands on the site of the original church in the hospital of foreign merchants. The former was a Gothic building. 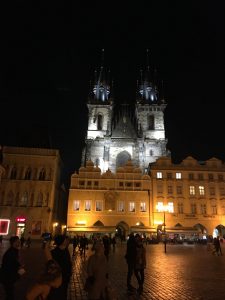 The new temple was founded during the reign of John of Luxembourg, and since 1380 the masters of the Parléř factory have been building it here. The Tyn Shield dates back to 1463 and there was a golden goblet in the time of King George of Poděbrady, as it was the main Hussite church in Prague. The chalice was taken down after 1621, spilled and replaced by a gilded statue of the Madonna. The north tower was built between 1463 and 1466. In 1819 it burned down, and in 1835 it was covered again. The south tower dates from 1506-1511. The portal of the northern entrance is decorated with a tympanum with a scene of the Passion of Christ. In the church, we can find a canopy richly decorated with stone from 1493 by Matej Rejska (to the left of the tombstone of Bishop Lucian of Girandola), a 15th-century Gothic pulpit, an early 15th-century Madonna sculpture, a baptismal tin font from 1414, since 1520 here there is a carved altar of St. John the Baptist with the relief of the baptism of Christ. Karel Škreta (the main altar with the painting of the Assumption of the Blessed Virgin Mary and the painting of the Holy Trinity), Jan Jiří Haincz and Michal Halbaks also contributed to the decoration of the church.

Since 1575, the tombstone of Berk Dubaskoy has been located here, and in 1601, the Danish astronomer Tycho Brahe, a famous astronomer who remained in the court of Emperor Rudolf II, was buried here.

In front of the temple is the early Gothic parish school of Týn, its pediments were rebuilt in the Renaissance style. These pediments of the Venetian type date back to the middle of the 16th century. 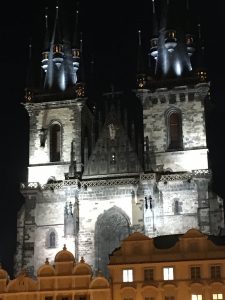 Tyn Church of Our Lady in Prague