You are here: Home » Mineral springs in Karlovy Vary

What do you know about Karlovy Vary – one of the most popular resorts in the Czech Republic? The healing springs of mineral water brought glory to the city, but many gourmets learned about Karlsbad (as Karlovy Vary was formerly called) thanks to the famous drink “Becherovka”, waffles “platzkam” and the international film festival. This article is intended primarily for people planning to spend their holidays in resorts and hotels in Karlovy Vary, but it is also good for expanding their horizons. You can’t get bored during your vacation! Visit famous landmarks and events, immerse yourself in the distinctive culture of the region, improve your health and taste exquisite Czech delicacies. So, here are the best ways to have fun and usefully spend time in Karlovy Vary. 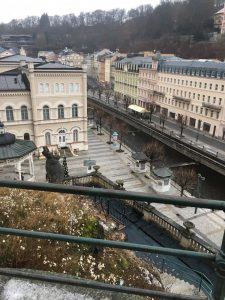 The history of the city

Traditionally, an overview of the city should start with the history of its foundation. The construction of Karlsbad began at the beginning of the XIV century by the decree of King Charles IV (to him the resort owes not only its appearance, but also its modern name) on the site of the already existing settlement Vrzidlo (from the Czech “geyser”). There is a legend in local folklore that the Roman emperor and, concurrently, the Czech king Charles IV hunted in his lands, injured his leg and, by a lucky coincidence, found himself not far from a spring gushing out of the ground. The wound washed out with healing water healed very quickly, and the monarch took it as a gift from God. Less than a year later, a small settlement at that time received the status of a royal city and began to develop at a frantic pace.

In its lifetime, Karlovy Vary has seen many ups and downs. Terrible fires and floods in the 16th-17th centuries destroyed most of the buildings, and then the Thirty Years’ War swept through the lands of Carlsbad, taking with it not only buildings, but also the lives of hundreds of people. The white stripe replaced the black at the dawn of the 18th century. The emperor of Austria-Hungary, Joseph I, came to power, annually allocating large subsidies for the development of the resort’s infrastructure. Beautiful nature and mineral springs known throughout Europe were complemented by high quality accommodation and service, which made it possible for several decades to turn the small town into one of the fastest growing resorts in the Old World. Even Peter I visited Karlsbad twice, thereby promoting it well in the Russian Empire. Rest in Karlovy Vary could only be afforded by the well-to-do aristocracy, such outstanding cultural and artistic figures as Goethe, Schiller, Beethoven, Chopin, Paganini, Liszt, Wagner, Freud, Turgenev, Gogol and many others became guests of the resort. Since then, the authority of Karlovy Vary has never shaken and to this day the city is considered one of the centers of culture, architecture and art in Europe. 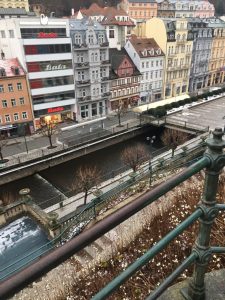 A story about Karlovy Vary without a description of its healing springs would be incomplete. On the territory of the resort there are 13 official healing springs (in fact, there are 14 of them, but “Prince Wenceslas I” and “Prince Wenceslas II” are one spring leading to two vases), distributed among five colonnades: Sadovaya, Rynochnaya, Melnichnaya, Zamkova and Geysernaya.

Without a doubt, the most elegant and aristocratic colonnade of the resort, which includes the springs of Rusalka, Skalny, Libuše, Melnichny and both Prince Wenceslas. It was erected in 1881 by the project of the architect Joseph Zytek, so that eminent guests of Karlovy Vary and European aristocrats could go to the healing springs and drink mineral water in any weather. The colonnade is made in the neo-Renaissance style and has a length of over 130 meters. The snow-white structure amazes the imagination with its monumentality, twelve allegorical sculptures that adorn the facade, an elegant balustrade and Greek columns that lead those who walk to the orchestra pit located right there. It is worth visiting the Mill Colonnade not only during the day to see it as a historical landmark of Karlovy Vary, but also in the evening, when the lights come on and the symphony orchestra starts playing a classical concert. Water from the springs of the Mill Colonnade is prescribed for metabolic disorders and diseases of the gastrointestinal tract; patients with diabetes often come here. 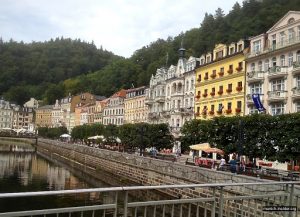 Today it is the most famous and beautiful spa colonnade, towering over two healing springs of mineral water: Rynochny and Charles IV. The structure was erected in 1882 by the famous architects Helmer and Fellner, and was of a temporary nature. It was planned to demolish it in a couple of years, replacing it with a stone structure. But the openwork snow-white gallery, made of wood, with a gable roof and the finest columns, turned out to be so beautiful and durable that it was decided to leave it. Now the Market Colonnade resembles a lace box with an elegant ligature, and invites visitors to relax inside at comfortable tables or take a promenade along the gallery. Mineral water from the Market Spring and Charles IV strengthens bones and cartilage. Here people with pathology of the musculoskeletal system are treated, as well as recover from injuries and operations. 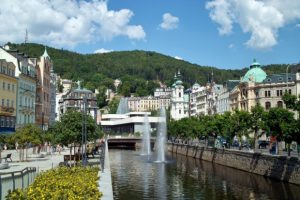 The Hot Spring Colonnade has several springs with temperatures ranging from 30 ° C to 72 ° C. Water works differently depending on the temperature. If you drink hot water, you will be “strengthened”, and if you drink it from sources with a temperature of 30-40 ° C, then on the contrary, “weakened”. Therefore, you should always consult your doctor before taking water. What you can do without a doctor’s recommendation is to breathe air from a geyser, saturated with useful microelements.

The Art Nouveau colonnade was erected at the beginning of the last century on a small hill with a wonderful view of Karlovy Vary. The project of the colonnade protecting two springs – the Upper and Lower Castle – was created by the architect Johann Friedrich Oman. The course of drinking cure with water from the Lower source is prescribed to strengthen bones and cartilage, and from the Upper (colder) one – for periodontal disease and caries. 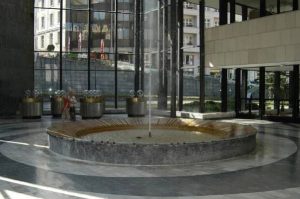 Walking past the Garden Colonnade is quite difficult, as it is located in one of the most beautiful places in Karlovy Vary, not far from the Dvorak Gardens and the Thermal Hotel. This is where the collection point for most of the walking and bus tours of the city is located. The colonnade was designed in 1880 by the already familiar architects Fellner and Helmer. In 2002, the openwork colonnade was restored according to old projects, so now it looks almost the same as at the end of the 19th century. The Garden Colonnade is able to protect vacationers from the hardships of the weather, who want to take a walk in the air to drink water from one of three springs: Svoboda, Sadovoe and Zmeinyi. They differ in temperature and, as a result, in the effect on the body. Water from Liberty is prescribed for men with hormonal problems and prostatitis. The course of water from the Garden Spring helps to cure and recover from liver diseases (in particular, hepatitis A), remove sand from the kidneys. And the coldest spring in Karlovy Vary, Zmeiny, with a water temperature of only 30 ° C, is useful for dermatological problems. Once again, we draw your attention to the fact that self-medication with mineral waters may be useless or even harm the body. Be sure to consult with a spa doctor.